Variable: A variable is nothing but a box with a label(its name) and a predefined type promise that you cannot be broken later. Have a look at mathematical equation below.

Here, the names X and Y are placeholders for some data that can justify the equation if put in their places. Similarly, in computer science programming we need something to hold data and variables are nothing but that.

Data Types: In the above example, X and Y can hold any type of value such as an Integer value(5, 10) or real value(2.0, 5.8). But to solve this equation, we have to relate them to a particular kind of value they can take and Data Type is that name used for this purpose in computer science.  Or “A data type is a set of data with predefined values used to declare variables/objects. Example: integer, float, double, character, string etc.”

In computer memory, everything is either 0 or 1. A data type is a thing that tells the compiler about what kind of values a particular set of bytes are of and depending on that the compiler takes further decisions on them.

A data type can be a predefined one or can be customized according to the need. Based on this definition criteria they fall into two categories.

Data Structure: Data Structure is an arrangement of data in such a way that they can be efficiently stored and retrieved. Or we can say that it is a special kind of format for organizing data. The general data structure includes Stack, Queue, Linked List, Tree, Graphs and so on.

We talk about Data Structures as an Abstract Model and their Concrete Implementation.

An Abstract Data Type is a logical and mathematical model defining some set of rules that have to be followed and some list of operations that have to be implemented by the concrete implementation of that model. We can think of ADT as a black box which hides the inner structure and design of a data type.

For example, an Abstract model of a Car can be… an object having four wheels, a steering, brake, accelerator, motor, some number of seats etc. etc. with on/off, run and some other operations.

A list, Stack, Queue, Tree, Graphs etc. are abstract data types having some logical set of rules and operations that have to be defined by their concrete implementation regardlessly of which programming language is getting used. In Java, inside java.util package there is a “List” interface which is nothing but an abstract model of List Data Structure whereas, ArrayList and LinkedList are two concrete implementations of List ADT.

Algorithm: An algorithm is a step by step unambiguous instructions to solve a given problem. There are two main criteria for judging the merits of an algorithm.

Algorithm Analysis: Algorithm analysis is nothing but finding the complexity(time and space usage) of an algorithm in terms of input size, being machine independent and considering just basic computer steps. It is the only way to find out the efficiency of an algorithm so that it can be compared with others to choose the best. Complexity is considered in terms of processing time(Rate of growth), memory usage, developer efforts etc.

Why  Algorithm Analysis: There may so many ways to solve a particular problem. But we need the most efficient solution out of all and to get which solution is most efficient, the analysis is needed.

Types of analysis: From algorithm analysis, we basically want to know that with which input the one algorithm takes the least time and with which it takes the longest time. Based on algorithm’s measurement is divided into following 3 types.

Asymptotic Notation: Asymptotic notation is kind of syntax or units that are used to express the best, worst and average cases of an algorithm.

In General, Big-O is used to represent the worst-case efficiency of an algorithm where lower bound is not considered. It is represented as f(n) = O(g(n)) where, g(n) is the function which represents the upper bound of f(n).

In simple words, we have a complex function f(n) and a simple function g(n) and we want to find a constant c such as, when multiplied with g(n), the resultant value will always be greater than f(n) from some point n0 for all n>n0.

Note: there can be any number of combination of c and n0. And if n2 is upper bounding f(n) then any value greater than n2 such as n3, n4  will also upper bound f(n) thus, they can also be big O of f(n) but we should always consider the tighter upper bound. 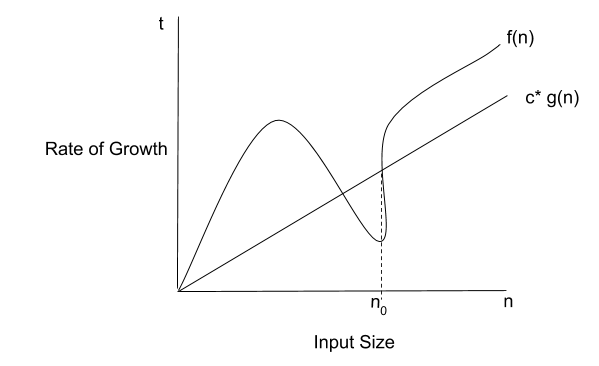 Here, we can substitute any value of c that satisfy the condition. But looks like 1 is the only value which can satisfy this.

Notice: there can be any combination of c and n0. And if n is lower bounding f(n) then any value less than n such as logn, log(logn)  will also lower bound f(n) thus, they can also be big 𝛀 of f(n).

That’s all about the introduction of Data Structure and Algorithm but stay connected for next chapter “Linked List”. Happy Learning!! 🙂